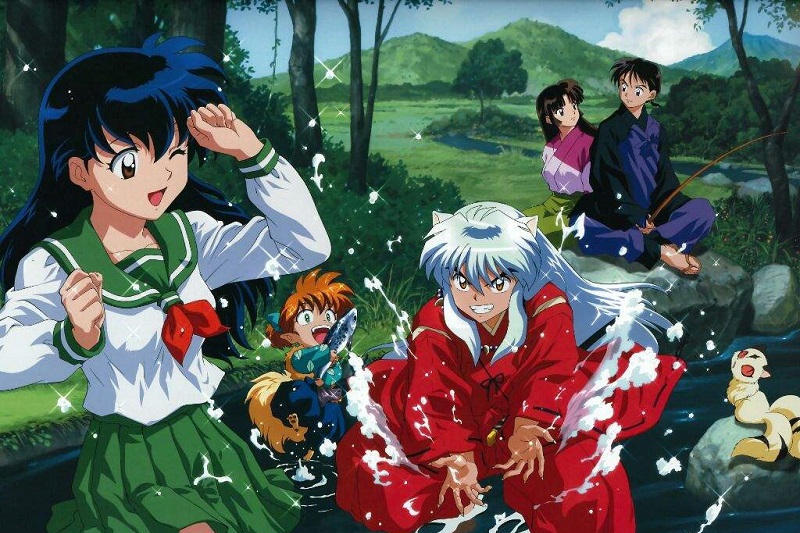 The story plot of Inuyasha is beautiful and interesting. Kagome is a school student living in the busy city of Tokyo. She is accompanied by her mother, grandfather, younger brother,and cat. Her family has an ancient shrine. One day, they were searching for the cat in the shrine. A centipede demon pulls Kagome down into the old well. When she lands, she found herself to be in ancient Japan. She wandered all over the forest and finds Inuyasha tied to the tree. Kikyo’s arrow has sealed Inuyasha on the tree. A centipede demon tries to attack Kagome for a Shikon Jewel but found that to be inside Kagome.
Kaede comes to know about Kagome and believes that Kagome is the rebirth of Kikyo. Kagome was able to free Inuyasha and also kills the centipede demon. Due to Kikyo’s betrayal, Inuyasha is full of insolence and contempt. He asks Kagome to give the jewelry so that he could get the full power of a demon.
As Kagome is the rebirth of an influential priestess, she was able to slightly control Inuyasha. All that she was able to do is order him to sit and push his face into the ground. A crow demon had stolen the Shikon Jeweland when Kagome was trying to destroy using the arrow, the jewel shatters and shards get scattered all over the city of Japan. The Shikon Jewel is the most powerful one and anyone having a small jewel can grand immense power. Kagome and Inuyasha start to travel around in search of shards before it gets into wrong people.
At the start, Inuyasha did not accept Kagome since she looks almost sameas the person whom he was betrayed by. Kagome ensures to maintain a good level of friendliness with Inuyasha but at times she becomes hot-headed. As they are traveling around to find the shards that were obtained by evil demons, their feelings and relationship steadily grow. Both did not want to admit their love and true affection but they stick together in all hard times. Their relationship grows more than companionship and friendship.
On the way, there were able to pick up friends like a little friendly fox demon named Shippo, a noble but mischievous monk named Miroku, and a demon slayer named Sango. A Wind Tunnel is seen on the right hand of Miroku. He holds that always as it is a curse that was put by Naraku on his family. He always likes pretty girls and has a soft corner for them.
Naraku has destroyed the entire family and village of Sango. He is only one who has escaped from the Naraku’s destruction. He has also helped his pet cat Kirara to escape from the destruction along with him. So, all the five Kagome, Inuyasha, Sango, Miroku, and Shippo travel all around medieval Japan to destroy Naraku, collect pieces of precious Shikon Jewel and fight demons that come on their way.
Their adventure is amazing and it is interesting to watch on television as a series. This series was aired for four years every Monday. The total episodes were 167. It comes under the genre Comedy, Adventure, History, Demons, Supernatural, Romance, Fantasy, Action,and Magic.